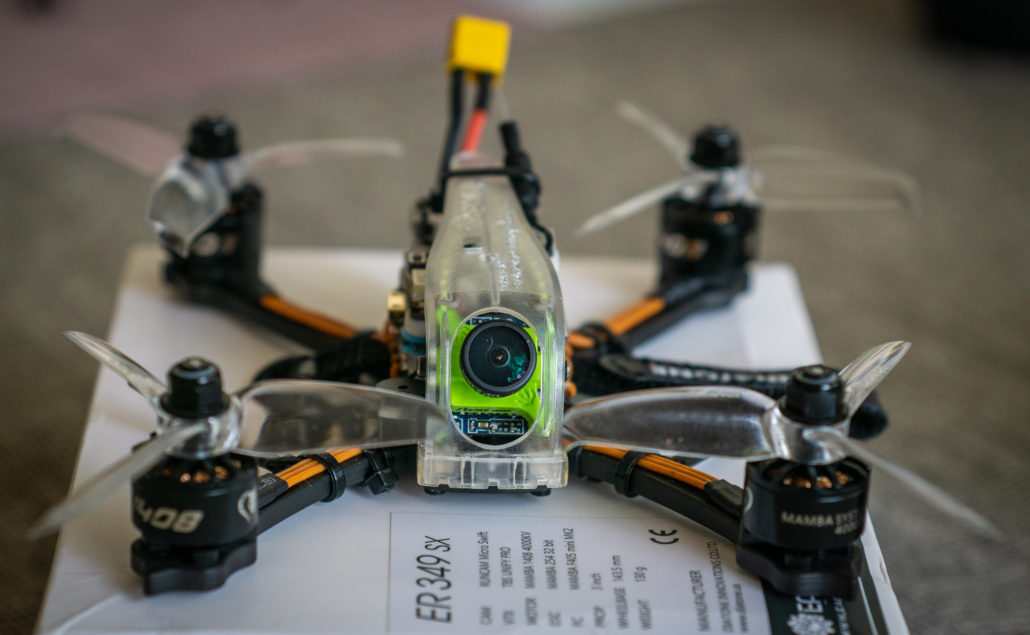 It is hard not to like the ER349 drone. It is powerful, fast and a joy to fly.
Banggood sent this one to me for a review. An interesting collaboration between Diatone and Eachine made as a combination of parts from the well known Diatone GT R349 and GT R369.

I have been flying it for the past two weeks and I can easily say that this one has become my favorite in this short period. It ticks all the boxes for a small sub 250 gram all up weight quadcopter with premium quality components and affordable price that could easily outperform most of the 5 inchers that I have.

This is a flying rocket that could easily reach up to 180 km per hour and it is intended for the intermediate and advanced users.

It comes with a presoldered connector for R-XSR receiver so it is easy to get it in the air in a very short time.

The ER349 drone comes neatly packed in a small box with Diatone branding and an Eachine sticker on the top.
The contents of the box include of course the quad, two sets of propellers, one 3052 and the other one 3028, three battery straps with different length, several zip ties, a set of various spare screws, spare ESC harness, XT30 female connector for your battery, a buzzer, manual and a set of stickers.

The quadcopter itself bears the recognizable Diatone build quality mark; it looks very similar to the abovementioned GT R349 and R369. The only difference is the set of leds on the top of the canopy, which is a nice touch, but it would have been nice if there were a switch to turn them off.

The motor are Mamba 1408 4000KV made by 3B. Great build quality reinforced motor axles, and noticeable notchy feeling when turned because of the minimal gap between the stator and the rotor.

The ER349 drone stack is Mini Mamba MK2 stack with 32bit ESCs rated to 25A. The ESCs are set to dshot 600 but can do dshot 1200.
The flight controller is F4 with OSD. The MK2 version has a bit changed layout and holes on the solder pads. It uses the Fury F4 OSD target and it comes flashed with BetaFlight 3.5.1

The provided battery lead has an XT30 connector while the one on GT R369 is XT60. Swapping the battery connector with XT60 would increase the performance of this quad even more. 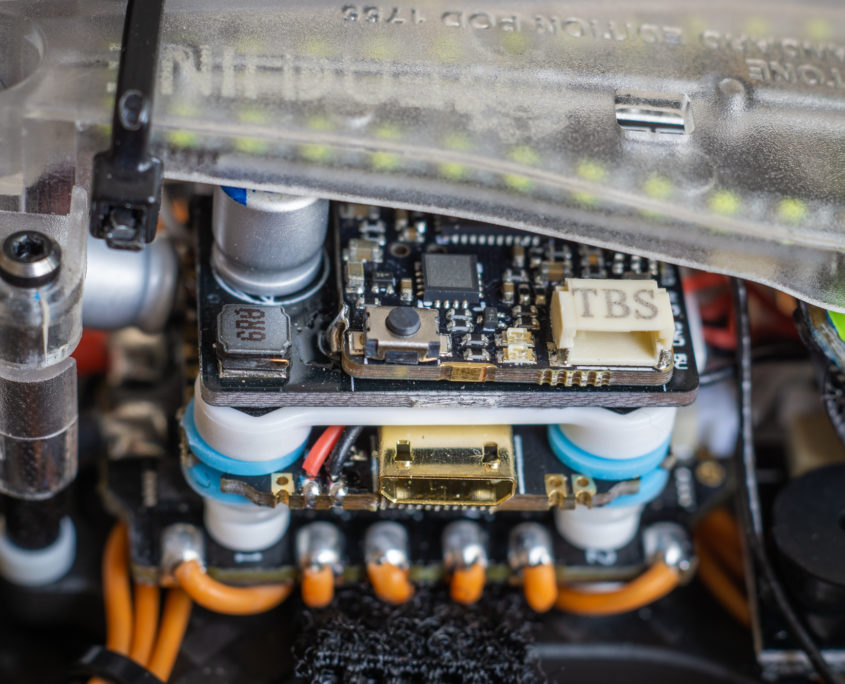 On the top of the Mini Mamba stack, there is a TBS Unify micro 800mW VTx attached to a plastic cover with a double-sided sticky tape. It comes locked to 25mW and it could be easily unlocked to its full potential by holding the button for 20-25 seconds and the red led will flash three times to confirm.
For a Vtx antenna, they have used a regular dipole antenna. The placement of the antenna could be a bit better since it is mounted horizontally above the canopy and the frame may easily shield it causing low signal reception.

The camera is Runcam Micro Swift CCD camera with 2.1mm lens that will not display any jello.

Diatone had really done their homework when it comes to the video noise. They have included two capacitors, which are more than enough to provide a good noise free video signal.

It is not the first time that Diatone has managed to provide a quadcopter build that has great quality components for an affordable price.

The build quality is traditional to Diatone, super clean build. All solder joint are looking great. The motor wires are routed under the ESCs. All wires cut to the correct length and everything is neatly tucked in.

This drone flies like rocket, but in the same time it is controllable an easy to fly.
I have decided to use the 3052 propellers, since the 3028 have too low pitch for my liking.
It is really agile with has tons of power and it tends to shoot into the air whenever you reach a certain throttle percentage, which could be prevented if you fly it like a racing quadcopter.

I was using a 650 mAH 4S battery that gave me around 3 minutes of flight time. This is very similar to the performance of my 5-inch quadcopters.
Not exactly sure about the top speed, since I had no way to measure it. My guess is that this quad could easily reach 150-180 km/h

You can get it here
Get a 20% discount by using the coupon code BGOPCODE26 and pay only $136.
The code is valid till the end of September or for 20 purchases whichever comes first.